I think I’ve finally answered that nagging question that runs through my brain from time to time, namely: why is it that so many Disney characters have dead family members? If these are fairy tales created for children, why is there so darned much death? I suppose the first and most obvious answer to the question would be that Disney based his movies on fairy tales, which themselves were at times quite dark and had plenty of death in them, but it’s not as though those stories were followed verbatim. Liberties were taken, and taken frequently. Even Disney’s own daughter expressed her unhappiness at scenes like the death of Bambi’s mother, telling her father, “Walt Disney can do whatever he wants”, implying that he simply chose not to eliminate something even though it was well within his power to do so. The death of Bambi’s mother is one of the most poignant moments in Disney history, probably because it was the first time a “good” character died and stayed dead. The only other permanent death in a Disney movie by that time had been the death of the Evil Queen in Snow White. It’s also interesting to note that Bambi was released just after Dumbo, another movie with mother-and-child separation but not death, and a happy ending for mother and son.

But if you think about it, there is a very important psychological ploy at work here, and it actually makes for better storytelling.

I was half-watching Wreck-It Ralph for the umpteenth time, and it was near the end, where Ralph makes that torpedo dive straight toward the diet cola mountain to activate the beacon by smashing through the layer of candy below–a moment sure to bring about his death. Of course, the dialogue was appropriately poignant (the bad-guy affirmation from the movie’s opening sequence — great choice), the music swelled dramatically, and I was recalling the first time I watched this movie when it suddenly occurred to me: I had actually wondered at the time if this might really be the end for Ralph. I had actually entertained the possibility that he might not make it.

Because Disney has proven, historically speaking, that they can do it. They are perfectly capable of killing off any of their creations. They HAVE done it. Bambi’s mom, Simba’s dad (who basically dies RIGHT IN FRONT OF YOU), Cinderella and Snow White and Belle and Rapunzel all have dead parents, you see what I mean. This is Disney’s way of saying to the audience, “Don’t take anything for granted. This isn’t just some cutesy cartoon for kids. We don’t guarantee absolute happiness here. Somebody could die AT ANY MOMENT.” 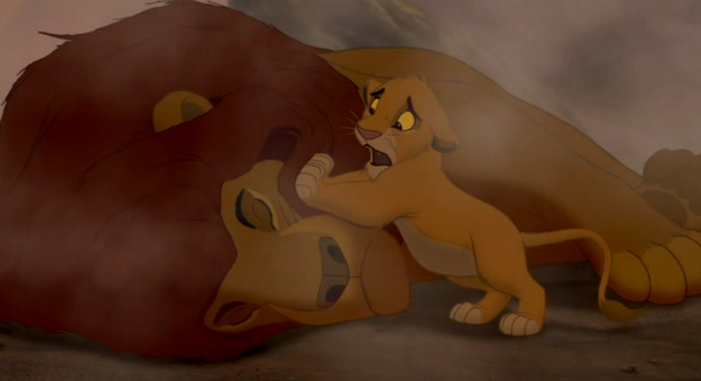 I’m reminded of an anecdote about a young girl watching David Copperfield’s live stage show, in which he opens the show by flying in from seemingly nowhere and landing safely center stage. Later on, as he’s performing a dangerous suspended escape attempt, the girl asks her dad, “Why is everybody so scared? Everyone knows he can fly.” Oops.

In these moments of emotional vulnerability at the height of a great story, some part of our brain remembers those moments when Bad Things happened to Good Characters. It makes us realize that, even though we’re watching a Disney movie, it’s not all hearts and flowers. We don’t just assume that our hero will triumph in the end, because SOMETIMES THEY DON’T.

So why do this? As I see it, it’s simply a way of keeping the audience on their toes. The worst thing that can happen in a story is to have the audience lulled into complacency . . . unless you’re planning to use that to your advantage. An audience which is complacent for too long eventually becomes bored, and with a burgeoning behemoth like Disney, who most likely planned to keep capitalizing on that winning formula of adapting fairy tales into animated films, the kiss of death would have been to become boring. Yes, there are similarities among all of Disney’s films, but mainly in terms of quality control. You know you can expect a visually breathtaking experience, hopefully some really good music, and a good story. A good story is one that is not predictable, and even though one might argue that there is a formula at work, there are usually enough differences among the stories to keep us coming back for more. And more importantly, when we’re right there in the middle of the film, and Something Bad happens to Somebody Good, we remember in that moment that sometimes heroes leave and don’t come back. Intellectually, we know that there will be a happy ending, but will it be the one we expect? And as long as the answer we give ourselves is, “maybe” or “I don’t know”, then the story has done its job in keeping you engaged until the very end.

So the next time you find yourself wondering (if you should happen to) why Disney seems to be so fond of harping on death in, oh, every one of its movies, just remember that little tingle you get in the back of your mind at the climax of the third act, the one that truly keeps you wondering, “will this be okay?” And thank the Disney writers for keeping you guessing.