Yes, I know this blog is about movies, but today I just felt like writing about one of my favorite tv shows, ABC’s Castle. I may do this a bit more often, as it’s more likely that I’ll find time to watch an episode of something rather than a full movie. And hey, the latest two-part story was almost movie-length, so if you’re going to be nitpicky with me, at least there’s that.

[As with anything I write about, spoilers abound, so if you’re a Castle fan and haven’t seen the “Target/Hunt” episodes, just stop reading. You probably know most of the spoilers by now, anyway.]

When I first saw the previews for “Target”, I knew I wasn’t going to watch it until after “Hunt” had aired so that I could spare myself the week-long wait for the end of the story. Yes, a hostage storyline is so far removed from everyday life that it’s not like the story would have engendered any real fears for me, but the parts I saw featuring Castle’s anguish over his missing daughter were plenty relate-able, and being an empathic person anyway, I figured it was best to wait. It was obvious that the first episode would have a hefty cliffhanger, as there would be no real need for a second episode if Alexis were rescued in the first. The only misstep I took was peeking at IMDB in between episodes to see if the guy in the screenshot for the second episode really was James Brolin–which it was, listed as “Castle’s dad”. Oops. 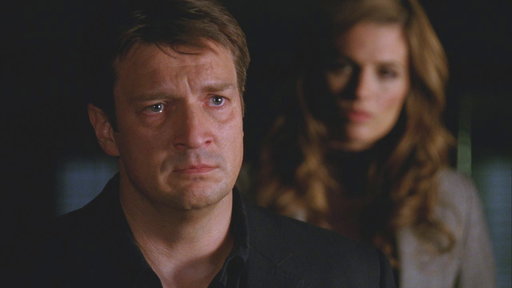 I will say, I think I actually enjoyed the first episode more than the second in a lot of ways. Maybe I’m just sadistic or something, but Nathan Fillion played an intensely anguished and angry father so brilliantly; I believe it’s the most serious role I’ve seen him take on, and he was really wonderful. Castle was at once caring with his mother and terribly vulnerable, and then almost immediately forceful in pushing the investigation and demanding to be on hand at every step, masking his pain as best he could. Of course, the writers played on that vulnerability very well, particularly with the number of references to Alexis as his “little girl” or his “baby”. Way to yank on those heartstrings, folks. And while I really appreciated the care with which Laney told Castle that the blood she found in the van wasn’t Alexis’ (“it wasn’t your baby”), I have to say I was most moved by Gates telling Beckett to do whatever it takes to “get his little girl back”. It would sound trite coming from almost anybody else; it came across much more powerfully coming from Gates, and I liked the implication that no matter what rough patches they’ve had between them (he almost got on her good side with that rare figurine from the storage locker, remember?), she does at least see Castle somewhat warmly and looks out for him more than she would an “ordinary” citizen. I think that’s a big step for Gates. And…I got a little misty at that part. I like seeing little glimpses of things that are significantly out of character.

Which means that I LOVED Castle’s one-on-one with the getaway driver at his sister’s house. When Castle told Beckett he’d like a few minutes alone with the driver, I actually said out loud, “I’m pretty sure that’s not a good idea!” And I suppose Gates’ instructions to Beckett to do whatever it takes included making what would otherwise be a Very Bad Choice in walking out of the room. I’ve read just a bit on a couple of forums where people questioned whether they’d like to have seen exactly what Castle did to make the guy scream like that. I have to say, if he did what my imagination thinks he did, they wouldn’t have been able to air it on network television. And that’s the kind of thing I like having left to my own imagination; it makes for a more personal experience, because the scream you heard immediately called to mind whatever you perceive as a hellish, terrifying moment of torture. We also never see the guy again, so you never get any kind of affirmation that the horrible thing you thought of did or didn’t happen. But that blank stare on Castle’s face…”If you hit me, I’ll press charges.” “I don’t care.” Wow. Still getting goosebumps.

Should I mention how beautiful and realistic the streets of Paris looked in this episode? No, probably not. I’m not sure what happened there, but apparently Castle‘s production budget doesn’t leave much for VFX. Ouch.

Like many others, I think the casting choice of James Brolin as Castle’s father was really inspired. It’s not like I’ve ever been a huge fan of Brolin, but he had the look, the expressions, the smile–and the banter between the two of them was very nicely-written. Vintage “ordinary” Castle, with a levity somewhat uncharacteristic for the situation at hand, but there had to be some humor in there somewhere or else the episode would have become much too heavy. While I found the spy/vengeance portion of the story a little too far-fetched even for a show like Castle, at the same time, I wish the third act would have been just a bit longer. The buildup of the tension was apparently all about Castle and his family, rather than the reason why the whole kidnapping happened in the first place–not terribly surprising, but I actually could have used a little more “Bond-style” time there. No, I didn’t expect the explosive in the walkie-talkie, but it was a great idea, and the final escape looked fantastic. I wish they could have lengthened that escape just a bit, but given where they were holding Alexis, I’m not sure how that could have been done. I do like how they showed the build-up to the escape, though, where Dad Castle was giving instructions in flashback as Castle and Alexis escape the building and flee to the American Embassy. That was really wonderful.

At the end, I kind of felt like they really rushed to get us back to “normal”, whatever that is in Castle Land. I mean seriously, almost the first thing Martha says is that she made breakfast?? (Again?!?) Like it’s just another ordinary day? I wish she would have shown just a bit more emotion when Castle and Alexis got home, although she probably shed plenty of tears when they contacted her to let her know they were okay. That would have been nice to see. (Like I said, I’m a little sadistic. I like seeing people shed tears.) But I suppose, she always has to keep herself pulled together when she’s in front of everyone else–gee, wonder who else is like that?–so I guess I’ll allow it. She is an actress, after all. And yes, I was touched and a little surprised when the copy of Casino Royale showed up in the mail as an indication that Dad Castle may in fact still be alive and well, and obviously back in hiding. (Have I mentioned how willing I am to be led around by the nose rather than try to anticipate the next steps of a story?) Although I had to wonder: 1) how long did it take for Castle and Alexis to get back home? and 2) did Dad Castle overnight the damn book? How long had it been there? I don’t know, enough of that scene played weirdly enough for me that I almost wished they would have ended the show with that picturesque run up the steps of the American Embassy in Paris. But then, this is Castle after all, and not really a spy movie, so I guess it had to end the way it did.

All in all, I loved this story arc, and there were lots of wonderful moments in there, particularly from unexpected places. Speculation abounds as to what the resolution of “Who Is Castle’s Dad?” might mean for other long-term storylines at work. I’ll just say that the writers have given themselves plenty of great material to explore some pretty interesting possibilities. I’m excited to see what happens next!