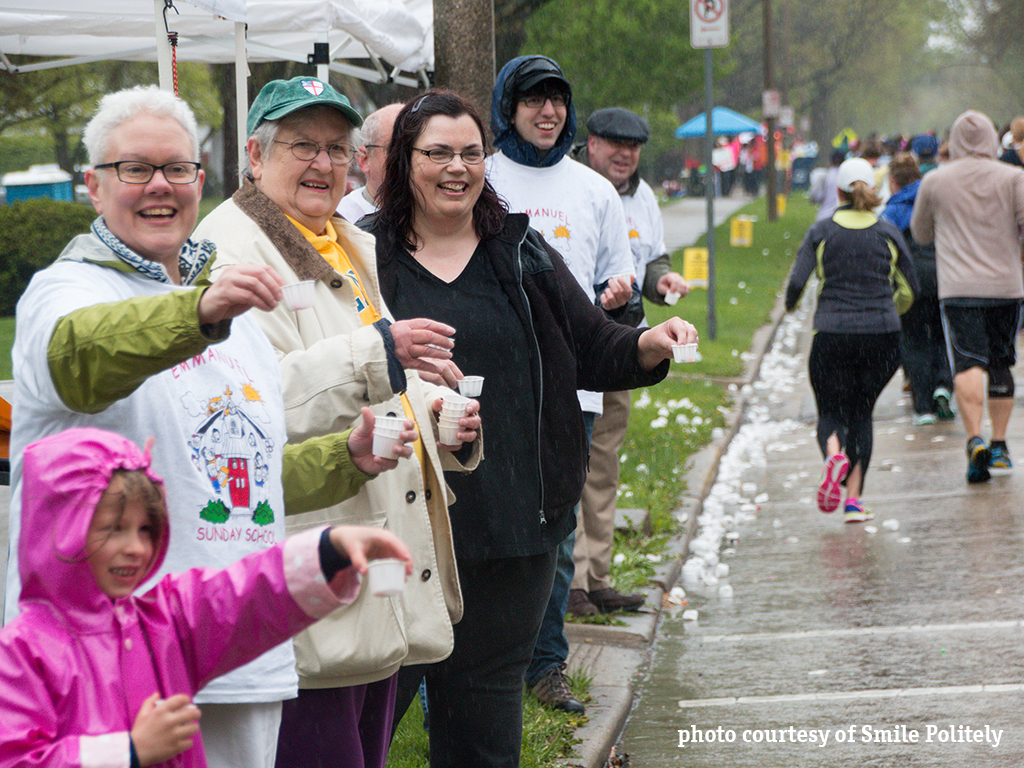 I’ll admit, I kind of admire runners. Like, running isn’t my thing. Never has been, never will be. But I have an number of friends who regularly run 5Ks, half marathons, and full marathons. Some run for various charities, some run just for fun. At least, I think some people find it fun…. (I kid!)

Recently, my church has taken a more active role in the life of the outside community. Sure, we support homeless shelters and deliver food to needy families, and other things that churches usually do. But someone had the cool idea of helping with the Illinois Marathon by handing out jelly beans to the runners on their way. Neat, right? I personally never would have thought of that! But I loved the idea of being able to sort-of participate in a marathon–just by cheering for the runners rather than taking the trek myself. Pretty sure that’s not something I can do!

So, for the second year in a row, I stood in the rain with our rector, her husband, and a number of other fellow parishioners, giving out jelly beans and encouraging the runners as they passed by. Lots and lots of runners gratefully accepted the sugar hit. Many others who declined still took a moment to thank us for being there to support them. And I think all of my runner friends managed to find me and at least shout a hello as they ran by. One friend, whom I’ve known since high school and who comes to town just for the marathon, sought me out on the route and broke stride just to give me a hug. What an awesome example of how kindness is returned to you, often right in the moment of giving it.

Remember when I said above that I was pretty sure I couldn’t run a marathon? Well, Random Acts has recently given me an opportunity to come close! A few days ago, they announced a new event, called Steps For Kindness. It’s a 5K (so no, still no marathon for this chick!), but…it’s a virtual 5K! This is something I had never heard of before! A virtual 5K is something you do on your own schedule, at your own pace. You can even break your run (or walk, in my case) into multiple sessions if you want. Heck, you can even do it on a treadmill at the gym or in your home! Now that’s a 5K I can actually do! Think you can, too? Just follow Random Acts on Facebook or Twitter to get details as they come.

And if you’re looking for something kind to do right now, you could always give a little to my CrowdRise campaign for Random Acts! Spreading kindness: the best birthday gift ever.